Moog extended its family of semi-modular synthesizers that includes the Drummer From Another Mother and Mother-32 with the announcement of the Moog Subharmonicon analog synth. This synth is an exciting addition that demonstrates the link between math and sound.

Moog Subharmonicon uses the principle of subharmonics by generating submultiples of its base frequencies. The two base frequencies are controlled by separate VCOs which each have two subharmonic oscillators, for a total of six voices. This allows for the creation of chords with up to six notes.

You can select the VCO waveform from sawtooth, pulse width, or both and its frequency can be quantized to four different musical scales. The two VCOs and four subharmonic oscillators are individually mixed with level knobs. The filter is a four-pole (-24dB/octave) ladder filter with resonance. Two envelope generators with attack and decay control the filter and volume separately. A four-step sequencer controls each VCO and its subharmonics. The sequencer rate is controlled by the polyrhythm.

Subharmonics are frequencies that are below the fundamental frequency with a ratio of 1/n. The Moog Subharmonicon is capable of producing 16 undertones, where n ranges from integers 1 to 16. The polyrhythm functions similarly, where each of the four rhythm generators divides the master tempo between 1 and 16. Assigning the four rhythms to the sequencers creates unique combinations of polyrhythms.

The patchbay in the Moog Subharmonicon allows it to integrate with other gear such as eurorack modules. There are 32 patchpoints which includes outputs for each of the six voices. And you get five 3.5mm patch cables in the box. The case of the Subharmonicon is removable so you can install it into the eurorack system as a 60HP module.

Moog Subharmonicon includes a DIN Socket to 3.5mm Plug MIDI Adapter. This connects in the patchbay to utilize MIDI control. The synth responds to MIDI clock and CC (control change) to adjust parameters such as tempo, VCO frequency and subharmonic frequency.

The Moog Subharmonicon analog synth should be arriving in stores this Summer. Make sure to preorder yours to get it as soon as possible. See more details in the manual here.

Find more news and announcements on the latest audio gear.

I am a music producer studying computer engineering. I enjoy reading and writing articles about music technology. I hope to make an impact in the field through the development of new products and technologies. 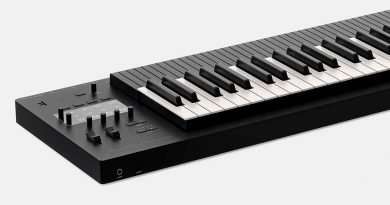